A Smart Traveller's Guide to Currency in Slovenia

It’s unlikely Slovenia will stay an untouched destination for long. Already tourists are flocking to Lake Bled but Slovenia has far more to offer than that beautiful lake.

However long you’re staying, you’ll stay ahead of your budget with a better understanding of Slovenia’s money situation. Read on to find out more about:

What Currency is Used in Slovenia

Slovenia has been using the official monetary unit of the European Union – the euro – since 1 January 2007. The euro replaced the Slovenian tolar, which itself was only introduced in 1991 to replace the Yugoslav dinar.

Slovenia is one of 19 European Union members – collectively called the eurozone – that have adopted the euro.

The euro is represented using the symbol € and the currency code EUR. As in many parts of Europe, in Slovenia you’re more likely to see the euro symbol written after the price (e.g. 10€) and the decimal point replaced with a comma (e.g. €10,50).

Slovenian tolar banknotes – but not coins – can still be exchanged at Banka Slovenije for an indefinite period of time. 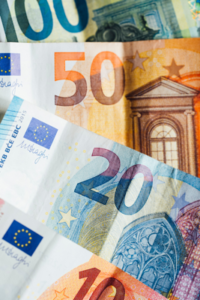 Get Familiar with the Euro Currency of Slovenia

Across the eurozone, you’ll encounter different designs for the euro coin but euro coins and banknotes are accepted everywhere, regardless of their origins.

You’ll have a much easier time making smaller payments with bills in lower denominations. Fortunately, the €500 bill is rare.

While banknotes are homogenous throughout the eurozone, euro coins differ depending on their country of origin. Every euro coin has a shared side – a side that’s the same across the eurozone – and on the reverse, a national design.

The common side of the coin displays the numerical value and a map of the European Union. The national designs differ for every coin denomination. The €1 and €2 coins feature famous figures from Slovenia’s literary scene.

Other coins take scenes from Slovenia’s rural life (the 50 cent coin features Mt Triglav, the 20 cent coin Lipizzanar horses, the five cent coin a sower, and the one cent coin some storks).

How to Exchange Currency in Slovenia

You’ll find plenty of opportunities to exchange currency in Slovenia if you don’t have a chance to do it before you go – or if you run out of money while you’re there.

Just remember, euros can be used interchangeably across the eurozone so there’s no reason to swap your Italian euros for Slovenian ones.

There are three main ways to exchange currency in Slovenia:

Slovenian ATMs – called bančni avtomat, are available throughout Slovenia. Cards with Visa, Electron, Mastercard, Maestro, Plus, and Cirrus logos will all be accepted.

If you’re provided an option to be charged in your home currency or the local currency, always choose the local currency. This feature is called dynamic currency conversion and using it usually results in worse rates than what your own bank provides.

You can exchange your money for euros at exchange bureaus or Slovenian banks, though you may not always get the best deals.

Most Slovenian banks take a commission (provisija) of 1%, compared to Slovenian exchange bureaus elsewhere, which usually charge around 3%.

When you head to a bank, find the window or counter displaying the words menjanica or devizna blagajna. Make sure the banknotes you receive are in good condition as some merchants turn away bills with even the slightest faults.

Travellers cheques are not a good way to go in Slovenia. With poor exchange rates and difficulty finding places that will cash them, you’re better off using currency exchange bureaus or ATMs.

Buying Slovenian Currency Before You Go

If you’re looking for value, add buying currency to your travel planning list and secure your euros before you leave home. This also frees up your time in Slovenia to do what you’re going there for: to explore.

Using Your Bank Card in Slovenia

These days, everybody travels with a bank card of some sort – but the types of bank cards you can use differ widely when it comes to fees and charges.

Bank cards are common across Slovenia, with Visa, Mastercard, and American Express widely accepted. Visa is more popular in Slovenia than Mastercard and is more likely to work in all ATMs. Smaller venues and shops may only accept cash.

Debit cards are common across Slovenia. Just beware, your home bank may impose high rates and fees if you use your card overseas. These fees might cover ATM withdrawals, overseas transactions, and currency conversions.

You’ll have no problem using credit cards in Slovenia, with most major cards widely accepted.

Also beware the fees you may incur by using your credit card overseas. These could include cash advance fees for ATM withdrawals, international transaction fees, and overseas ATM withdrawal charges.

The Average Costs in Slovenia

It’s always a good idea when heading off on a big trip to allocate a budget. It will help you determine how much currency you need to exchange, while also keeping you on budget throughout your travels.

To help you figure out your budget, here are some of the average costs you’re likely to encounter while in Slovenia:

Dinner at a nice restaurant