Understanding the Currencies of Ireland: A Travellers Money Guide

You’re finally making it to the Emerald Isle, but part of planning your trip to Ireland involves sorting out the currency. And that’s where things get tricky.

With two separate currencies across the Republic of Ireland and Northern Ireland, it’s natural that you're confused. So we’ve covered all the info you need to get you up to speed just in time for your trip:

What Currencies Are Used in Ireland?

In border regions, you may be able to use the currencies interchangeably but this shouldn’t be taken for granted.

In shops that do accept foreign Irish currency, they will use their own exchange rate (which can sometimes be quite favourable). They’ll return change in the local currency. 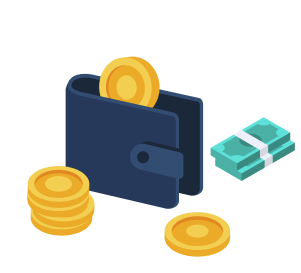 The Irish Euro: The Republic of Ireland’s Currency

One side of each coin is standardised throughout the eurozone while the other side features a local design of a Celtic harp and the word ‘ÉIRE’, which is Irish for Ireland. While you can still use non-Irish euro coins in Ireland, some machines struggle to accept them.

Euro banknotes come in seven denominations of €5, €10, €20, €50, €100, €200, and €500, though the higher denominations are rare and sometimes difficult to use. The appearance of euro banknotes is standardised throughout the eurozone.

Since 2015, Ireland has enforced a rounding system that rounds up or down to the nearest five euro cents. Prices ending in one, two, six, and seven cents are rounded down while the remaining numbers are rounded up. 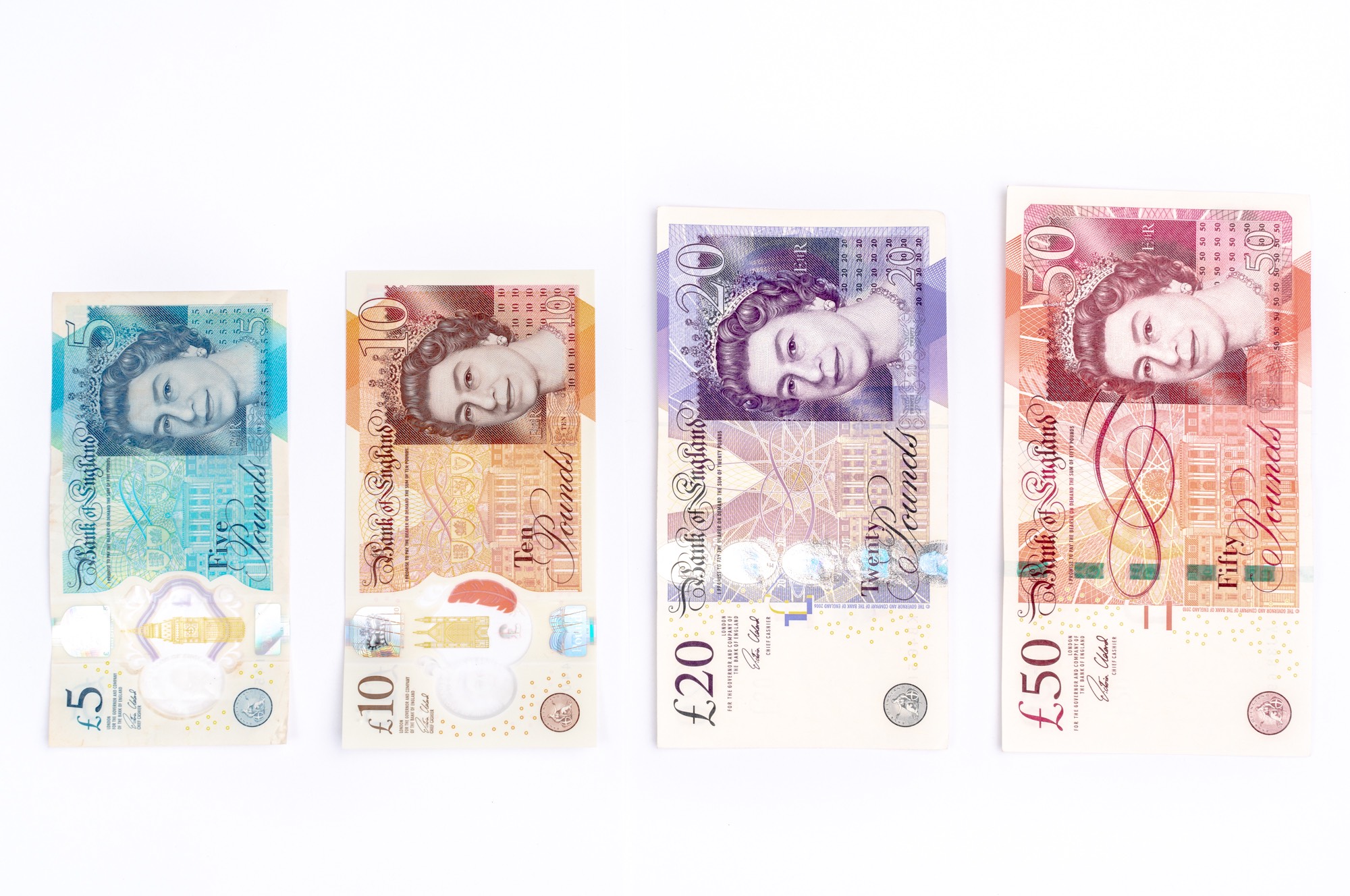 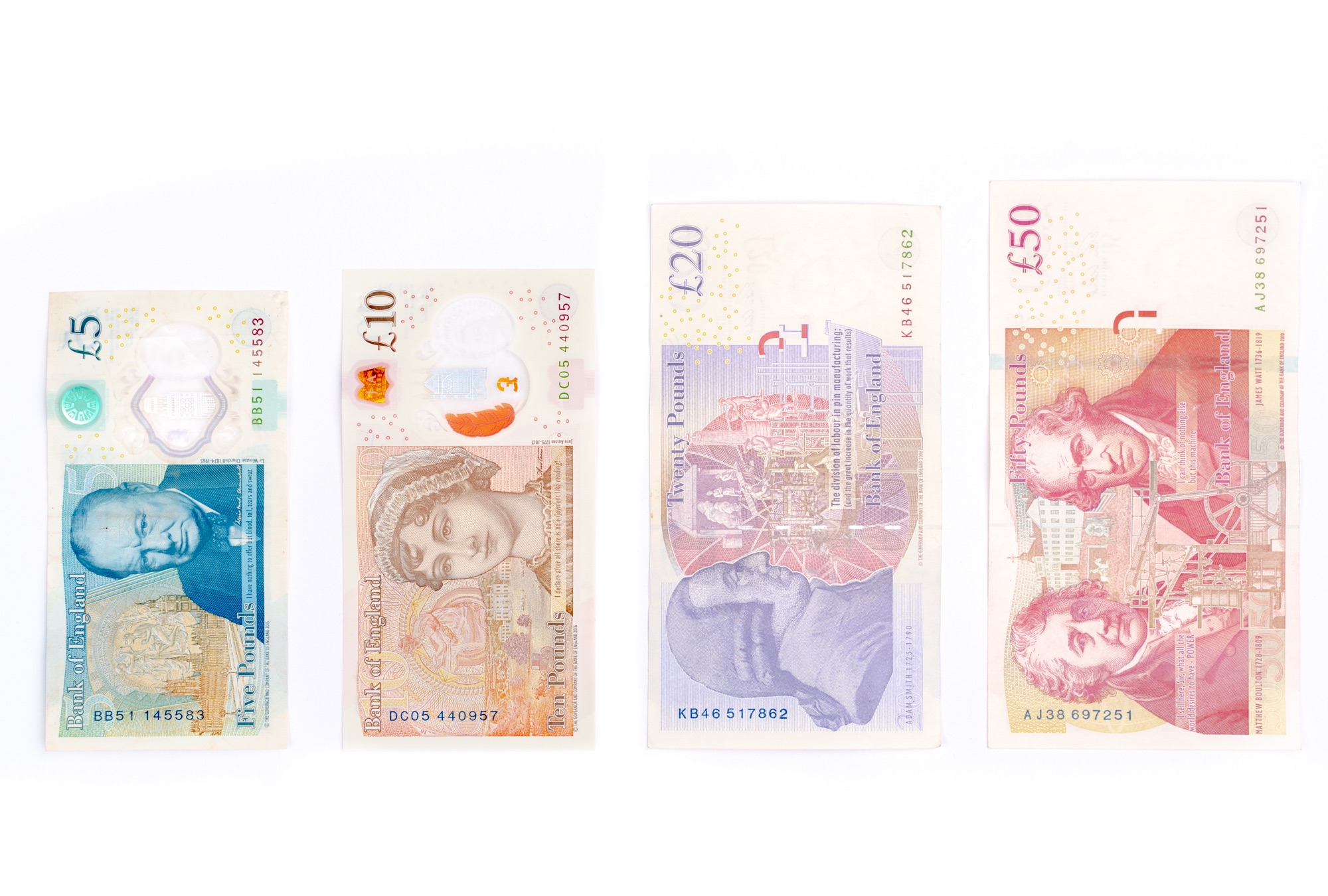 As part of the UK, Northern Ireland uses the pound sterling, with one pound comprising 100 pence.

Pound banknotes are available in denominations of five, ten, 20, and 50 pounds, though £50 notes are still rare and may be refused.

Unlike in the Republic of Ireland, currency in Northern Ireland isn’t rounded to the nearest five cents.

British pound banknotes don’t have a central authority: they are issued by individual banks across the kingdom.

In Ireland, you’ll find the common Bank of England banknotes used alongside notes from Northern Irish banks and the Bank of Ireland. You may even come across Scottish banknotes.

Even though all banknotes are legal tender, you might have difficulty using non-Irish banknotes in smaller businesses and vice versa. Non-Bank of England banknotes may also be harder to exchange back home.

A visit to any large central bank will quickly sort you out; they’ll exchange foreign pound notes into the local versions free of charge.

Both the euro and the pound sterling have foreign exchange rates which fluctuate depending on global and local politics, global and local economies, and supply and demand, among other factors.

The foreign currency converter below shows how many euros you can get against the Australian Dollar. You can also use it to find out how much it would cost you to buy either euros or pound sterling with S Money.

How to Exchange Currency in Ireland

Whether you’re arriving in Belfast or Dublin, you’ll quickly find that cash is the most common form of payment and is accepted everywhere.

If saving money is your priority, consider exchanging cash before you arrive in Ireland to avoid exorbitant bank fees or poor exchange rates. But if that option isn’t available to you, here are some of your best alternatives:

Ireland has plenty of bank ATMs (locally often called cashpoints) especially in the big cities like Dublin and Belfast. It can be harder to find ATMs in rural counties, such as Galway, Clare, and Limerick.

Many convenience stores have their own ATMs if you’re struggling to locate a cashpoint but just beware that they often incur an extra charge to use.

Your bank card must have a four-digit PIN as many Irish ATMs don’t allow for longer PINs.

Keep in mind, you may be hit with multiple fees from both your own bank and the bank of the ATM. These might include a local bank fee, a foreign transaction fee, a currency conversion fee, and more.

Some Australian banks have partnerships with foreign banks. Find out if your bank is partnered with any Irish banks and you may be able to cut down on bank fees by using their ATMs.

In general, currency exchange bureaus and Western Union branches have some of the highest rates in Ireland.

Dublin, Belfast, and other touristic areas have banks and currency exchange kiosks where you can swap your AUD for EUR or GBP.

While airports might be your immediate choice, you might want to wait till you arrive in the city to get better exchange rates.

Thanks to advances in bank fraud protection and an increase in places accepting card payments, travellers cheques are virtually redundant in 21st-century travel.

Few Irish traders will accept them and you may even have trouble changing them in a bank so your best bet is to avoid them altogether as they’re often more hassle than they’re worth.

Buying Irish Currency Before You Go

There are 3 main options to buy currency before you head to Ireland. These include:

Using Your Bank Card in Ireland

Bank cards are commonly accepted across Ireland, although you’ll have better luck using them in cities than in rural areas.

Plastic currency is undoubtedly the most convenient way to pay for things in Ireland, especially when you take into account the dual currency situation on the island. But using bank cards comes with its own pros and cons.

Get up to speed on the bank fees you may incur for using your card for foreign transactions.

Bank cards with Visa and Mastercard logos are the most widely accepted both in shops and at ATMs. American Express and Diners Club are accepted in fewer places.

Debit cards are hands-down one of the easiest ways to both pay for things in Ireland and to get cash from ATMs.

As long as your card has a Cirrus, Maestro, or Plus logo, you shouldn’t have trouble using it.

Just beware that some bank cards are far superior to others when it comes to international travel. For bank cards with fairer exchange rates and lower fees, look at these options:

Credit cards are often an appealing choice for travellers, with no currency conversion fees and features such as complimentary travel insurance.

They’re also widely accepted everywhere in both the Republic of Ireland and Northern Ireland. But make note, few places will accept cards without a chip and PIN.

There are a few charges that typically come with using credit cards. Many establishments charge a fee for credit cards. And that’s on top of the fees the credit card company applies, such as international transaction fees, ATM withdrawal charges, and cash advance fees.

Sure, they allow you to lock in the GBP and euro exchange rates. And it can be handy having both currencies already loaded onto one card to use in both the Republic of Ireland and Northern Ireland.

But what you save in currency conversion fees you often end up paying in reload fees and ATM fees. Sometimes there are lengthy wait times for your card to process a reload. And the exchange rates are comparatively poor.

It’s also worth thinking about the cost and ease of converting excess euros and pounds back into Australian dollars.

A better bet is to use a Revolut or TransferWise debit card, both of which allow you to buy your currency in advance to lock in the exchange rate.

What Will the Irish Currency Buy Me?

Ireland is not a cheap destination. And Northern Ireland is a little more expensive than its southern neighbour. But just how far can you stretch your euros and pounds?

A pint of Guinness

Leftover Irish Currency at the End of Your Trip? What to Do with That Unused Cash

While Ireland is a veritable tourist hotspot (who doesn’t want to visit the cliffs of Moher?), many tourists waste money through not finding the best ways to exchange their currency.

To help you avoid this quandary, here are a few practical tips to help you get the most bang for your buck:

Popping across to France or heading over to the UK while you’re so near?
Learn more about the French currency and British currency today.