Every country has its natural resources. And every country on Earth can count its musicians among them. Science has proved that music exists in all cultures. Songwriters everywhere create music for the same fundamental reasons, including ‘infant care, healing, dance, and love.’

But are they making the same bucks?

S Money calculated the Spotify earnings of the most-streamed song by artists of every country. Then we counted the takings of the most Spotified track in each country and put both sets of data into interactive tables with playable clips. Scroll on for a pan-cultural hit parade. 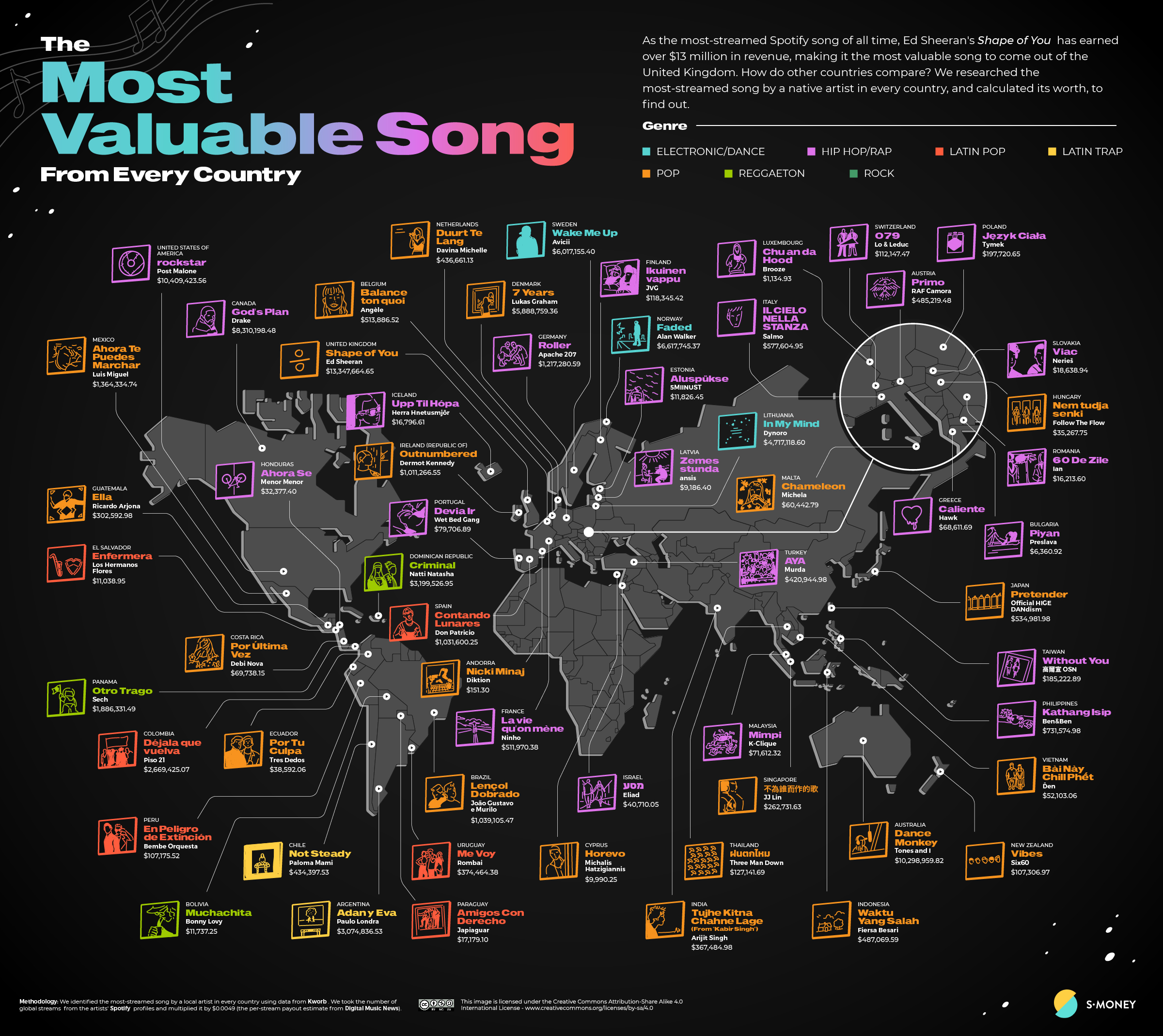 Click here to see the map in full size

Ed Sheeran from the UK wrote Spotify’s most valuable song in just 90 minutes – but this could be because he allegedly took his ideas from other songwriters. In fact, Spotify froze payments for Shape Of You until the copyright battle could be resolved. A shame, because the song has been spun 2,724,013,193 times around the world, totting up $13.35m in royalties.

Nicki Minaj also makes our list – but as a song rather than a musician. The most valuable song from Andorra (a tiny principality in the European Pyrenees), Nicki Minaj, is performed by Diktion, and was reported in the local press as “trending with over 22,000 views on YouTube.” The song has played 30,878 times on Spotify, totting up $151 for Diktion, who explains: “Here in Andorra only hard rap has been done, this music has never been done.”

Take a closer look at our data with this interactive table. Click the buttons to highlight songs from certain genres, and hit play for a blast of each local act made good.

Spotify users dig international hip hop. The top songs from 24 countries belong to this genre, making it the most-represented in the world. The most valuable, Post Malone’s rockstar, is from the US, of course. But a German hip hop track has also generated a seven-figure paycheck. Roller by Apache 207 has earned $1,217,281 from nearly 250 million plays.

You might expect to find some weird and wonderful genres in among the ‘world music,’ but Spotify users prefer to play it straight. The most unusual genre that appears in our study is rock, which represents just one country: Czech Republic. Rock track Svaz českých bohémů by Wohnout has earned $37,978 from 7.75m clicks.

Avicii’s Song the Most-Played in Sweden

Does familiarity breed contempt? Perhaps not. The most-streamed song in six of the ten highest-streaming countries is local to that territory. Post Malone’s rockstar in the US; Shape Of You in the UK; and Apache 207’s Roller in Germany are among them. The latter has earned $1.03m from local plays alone.

The True Value of World Music

Music is a universal joy with familiar motifs from culture to culture, but two other rules are at play:

As a platform, Spotify serves certain types of listener and listening habits. But there are infinite worlds of music to discover across the planet and all sorts of fun (and better paying) ways to find and support international musicians. Listener, the most valuable song may be the song you carry in your heart.

Using weekly totals data from Kworb, we recorded the most-streamed song in every country. We then checked that the top song and artist was from the country - if not, we moved down the list until we found a song from a local artist.

Next we visited the artist’s Spotify profile and recorded the global streaming number for the song. Then we took the number of streams in a country and multiplied it by $0.0049 (the per-stream payout estimate from Digital Music News).

We also used data from Kworb to record the most-streamed song of all time in every country, regardless of the nationality of the artist.

The data was collected in February 2021.