A Streetwise Traveller’s Guide to the Japanese Currency

Japan has so many different things for visitors to do including visiting Kyoto, Tokyo or Mount Fiji, going on the shinkansen (bullet train), skiing in Hokkaido, watching geishas or sumo wrestlers. A trip to Japan will be so much easier if you have a basic understanding of the Japanese currency. We’ve built this guide to help you get streetwise about paying for things in Japan.

What Currency Is Used in Japan?

The official currency of Japan is the yen, represented by the symbol ¥ and the currency code JPY. Other less common symbols include 円 and 圓.

The word ‘yen’ actually means ‘round object’ or ‘circle’ in Japanese and is typically pronounced as ‘en’ in Japan.

The Osaka Mint Bureau is responsible for minting and controlling the circulation of Japan’s currency.

The Japanese yen is actually the most heavily traded currency in Asia, thanks largely to its comparatively low interest rates. It’s also the third most traded currency in the foreign exchange market behind the United States dollar and the euro.

The Yen: The Face of Japan’s Currency

The Japanese yen currently has ten denominations made up of coins and banknotes. The ¥100 coin is the equivalent of US$1, in that it is the most common coin used on a daily basis.

Where in most Western countries, high denominations of currency are counted by the thousands, in Japan, they are counted in multiples of 10,000.

Both notes and coins feature natural scenes within Japan, such as flowers, trees, temples, and animals. Here are some other notable features:

The value of the yen fluctuates based on a variety of factors, such as the supply and demand of the currency globally as well as politics, recent events, and the state of the Japanese economy.

Use the foreign currency converter below to get the most up-to-date conversion of Japanese yen to Australian dollars. This tool will also give you an indication of how much it would cost you to buy yen with S Money today.

How to Exchange Currency When You Arrive in Japan

While Japan might be well ahead of the technological game in some quarters, cash is still favoured over plastic money in the country today.

If you’re travelling to smaller towns or to rural areas, you must have cash. It’s even better if you can get smaller denominations to pay for taxis, public transport, vending machine items, or at small restaurants and shops.

ATMs in the Japan

ATMs can be found in many 7-Eleven stores as well as airports, post offices, and other tourist hotspots.

Japanese bank ATMs can be fairly unreliable. Many won’t accept foreign cards while others are closed overnight or on the weekends. Even bank ATMs displaying Visa and Mastercard logos are iffy about international cards. Most bank ATMs also charge additional fees for withdrawals made outside operating hours.

Just a few branches of the major Japanese banks, such as SMBC and MUFG, have ATMs in major cities that will accept foreign cards. They will have signs in the window if they’re foreign card friendly.

Your best bet is the Seven Bank ATMs found in 7-Elevens. These are open 24/7, have English instructions, and accept foreign-issued Visa, Mastercard, Plus, Maestro, American Express, Cirrus, and Union Pay cards.

Japan Post Bank ATMs are another option, identifiable by the JP logo. There are over 26,000 of these ATMs nationally inside every post office and some train stations, shopping centres, and supermarkets. They usually accept foreign-issued cards but may operate on business hours similar to the post office.

Keep in mind that both Seven Bank and Japan Post Bank ATMs have withdrawal limits per transaction (¥100,000 and ¥50,000 respectively). You might even face stricter limits imposed by your own bank or card company.

If you’re exchanging any of the major currencies (including Australian dollars), you should be able to do so at major banks and the main branches of post offices.

Currency exchange offices such as The World Currency Shop have counters that can handle a broader selection of currencies in all the major cities.

While currency exchange may seem like an obvious option, it’s worth looking into alternatives. Two options – withdrawing cash from an ATM or organising your currency before you leave – will deal you better exchange rates than exchanging traveller’s cheques or cash in the country.

If you choose to exchange currency in Japan, be sure to have your passport on you as you’ll be asked for identification.

International airports also have currency exchange offices but these tend to have worse exchange rates and higher fees than offices in the cities.

Traveller’s cheques tend to be outdated in the world of 21st century travel, but they’re more handy in Japan than elsewhere, especially given the difficulties with using ATMs.

In fact, in Japan, you may get more competitive exchange rates on traveller’s cheques than money changers and ATMs.

However, you may find yourself limited to where you can exchange these cheques. Try major banks, hotels, and department stores in the big cities.

Buying Japanese Yen Before You Go

Japan is a cash-driven economy so organising to get yen before you leave home is a wise idea. There are 3 ways for you to collect currency before you go:

Using Your Bank Card in Japan

As with most destinations, you can use one of three types of plastic money in Japan: debit cards, credit cards, and prepaid travel cards. But the value you get out of your card will depend entirely on the type of bank card you use, with each offering different pros and cons.

Not always the best option, using debit cards overseas can come with big bank fees, including withdrawal fees, international ATM fees, and currency conversion fees. On top of that, they may offer a poor exchange rate.

Some of the debit cards worth looking at, with great exchange rates and low fees, include:

Though not as common a payment option as cash, credit card facilities are increasing.

Visa is the most commonly accepted credit card, although many businesses will also take Mastercard, American Express, and Diners Club. Many shops and restaurants have a minimum payment requirement to use a credit card (often between ¥3000 and ¥5000).

Take some time to familiarise yourself with the service fees involved in using your credit card for international transactions. These may include:

A great credit card to look at with deals designed for international travellers is the 28 Degrees credit card.

Many bank travel cards come with a long list of fees and don’t even provide the best exchange rates. It’s also not as easy to convert your unused balance back to Aussie dollars on your return home.

Even so, there are some valuable cards if you choose to take this option. You can load prepaid currency onto both the Revolut and TransferWise debit cards, which offer exchange rates comparable to what you see on Google or XE.

The Average Costs to Travel in Japan

One of our hottest tips is to only take the amount of currency you need for the trip. But how do you calculate that amount?

Don’t worry! We’ve provided a list of the average costs you can expect to travel in Japan:

A hotel room with double bed

A bowl of ramen:

A beer (during happy hour):

A temple or museum entry:

Leftover Yen at the End of Your Trip? What to Do with Unused Yen

Returning from Japan with stacks of yen banknotes is hardly an ideal situation but there’s no need to consider it a loss. Here are some ways to use those last few yen:

7 Money Tips to Get You Through Japan

So many people travel to Japan without being prepared and get ripped off in the process. Here are a few practical tips to help you get the most bang for your … yen:

3 Important Things to Remember When Paying in Japan

Once you arrive in Japan, there will be many new concepts and sights you will be wrapping your head around. So to make the journey a little less fraught with confusion, here are some hot tips to help you travel smarter:

Ready to buy some Japanese currency at a great value for your trip? Use our AUD to JPY currency converter to find out how much you’ll get for your Aussie dollars today. 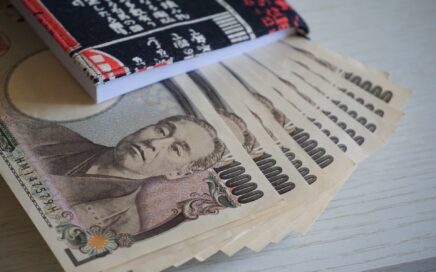 When is the best time to buy Japanese Yen with Australian dollars?

The best time to buy Japanese Yen with Australian dollars this year, was around the 10th of May when the AUD/JPY exchange rate hit 85.80. In contrast, the worst time was more recent. On the 23rd of August, the same rate bottomed out at 78.38. While it’s nearly impossible to time the market perfectly, if you are travelling to Japan and need to buy yen, a higher AUD/JPY exchange rate rate is better for you. It means that you will receive more yen to spend for each Australian dollars you have.   To work out the best time to […]